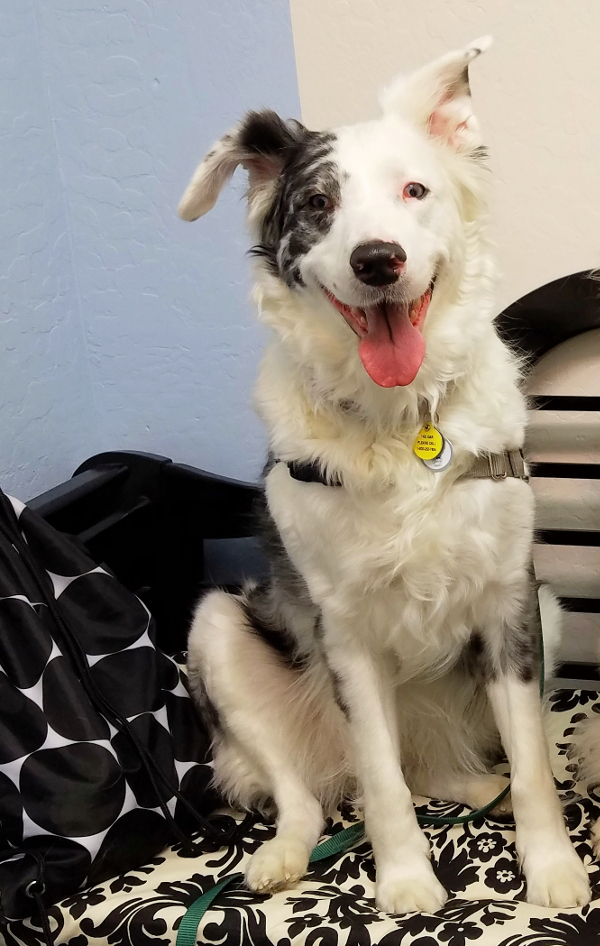 Julie met Hailey for the first time while being a foster mom for Amazing Aussies Lethal White Rescue of Arizona. This rescue takes in blind and/or deaf Australian Shepherds to find them forever homes.  Julie was already familiar with training these dogs having 1 blind and 2 deaf Aussies of her own.  Although, hearing Hailey’s hard knock life story made Julie think; maybe this one needs her forever home right now and should just stay put with her.

Julie made Hailey’s adoption final in just one day.

Hailey had a very hard life in the beginning. As a puppy she was adopted out and then returned several times in just one short year.  This meant in and out of shelters from San Diego to Sacramento. At the age of one she ended up with a family in Visalia, CA. Hailey was neglected so badly that the city was called in for what they thought would be a deceased dog pick up from the front yard. But this little girl was not gone yet!  She was a fighter.  She fought to live.  It was then that Hailey made her fateful trip to Amazing Aussies Lethal White Rescue of AZ.

Julie recognized that Hailey was a shy girl, not used to playing, very sensitive and unsure of anything around her. She also did not have any of her foundation learning skills and very little hand signals for deaf dogs. Julie worked with Hailey on all the basics but knew it was time for Hailey to go to school and work on her social skills and obedience outside of the comfort of her own home.

Hailey was enrolled at AZ Dog Sports where they were familiar with training a deaf dog and she quickly earned her Canine Good Citizen title. She loved going to class at AZ Dog Sports!  She actually found that being around

other unfamiliar dogs was not a bad thing.

Hailey became quite the social girl!

She transformed so much that Hailey was able to test and become certified with Alliance of Therapy Dogs.  As a Therapy Dog she visited with Veterans, Schools and Assisted Living Homes spreading her incredible smile. She then earned her Therapy Dog Novice AKC title. Hailey’s confidence continued to soar in her AZ Dog Sports classes and she also earned her Trick Dog Novice title after taking Trick Dog class.

Julie is so thankful for AZ Dog Sports being open to special needs dogs and helping them to excel and thrive like they did with Hailey!  Special needs dogs aren’t always as different as you think. Does it matter if they can hear? Hailey might be deaf, but she can feel vibrations.  She has an excellent sense of smell, and she can see you! You can communicate with Hailey and ask her to do anything just like any other dog; the only difference is, you use your hands to talk to her.

Hailey was a thankful girl, she knew she was rescued and given a new lease on life.   I think she found a way to give back by helping others in a big way, as a Therapy Dog.