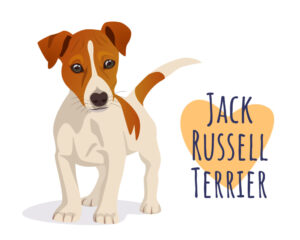 Have you met a Jack Russell yet?

The Jack Russell is a high-energy terrier bred in 1800s England for fox hunting by the eponymous Reverend John Russell. The demand for hunting dogs declined dramatically post-World War II, after which Jacks increasingly found themselves as family and companion dogs.

But though their original job has shifted, their original energy levels have not, earning them nicknames like Jerk Rascal Terror. The trick to living with a JRT is exercise—lots of it. In fact, a Jack named Bothy made history as part of the 1982 Transglobe Expedition. More commonly, Jacks excel at high-energy dog sports like agility, flyball, and triebball—and most love a good game of fetch. Jacks also love to train, and are good at it, too. (Think Eddie from the TV sitcom Frasier!) In short, a JRT with a job is a happy JRT (and one who’s much easier to live with).

If you enjoy great company and a bit of a challenge, and are ready to provide lots of exercise and training for your best friend, search nearby shelters and rescues for a Jack in need of a home.