SEND US AN EMAIL TO TELL US YOUR STORY!!  azdogsports@msn.com

I am 7 years old and for the past 2 years I have been in and out of training with 3 different trainers but never progressed very well. I do not make good choices when I’m outside and see other dogs and especially cars, motorcycles and trucks. Although I am very smart and a fast learner, I am a Border Collie so when I see and hear those things my activation mode takes over my being and I’m ready for the chase!!!!! (I guess I forget my owners arm is attached to the leash.)

My owner and I have been training at AZ Dog Sports with Monika for the past 4 months. My activated behavior is being addressed with private lessons and socialization classes. I am slowly learning to make better choices about my behavior when seeing dogs, cars, and trucks but it is very hard for me! I know that because I’m an older Border Collie, it make take me a long time to control my activation mode. Monika has given my owner some good tools to work with when we go for walks (aka practice time). My favorites are TREATS and pleasing Monika at our lessons! I’m soooo LUCKY!!!! 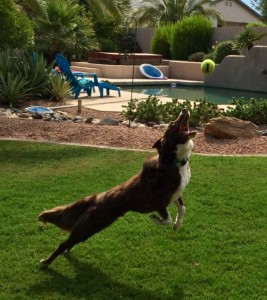 We rescued both of our dogs from Boxer Luv Rescue – our girl Miley in January 2012 and our boy Bunker in September 2012.  While Miley was a very easy going and friendly dog, Bunker immediately showed aggression towards other dogs and was extremely reactive. He and Miley got along great after just a couple days, but if he saw other dogs on our walks or in front of our house, he would go absolutely crazy – barking, charging, wailing, pulling, etc. He would pull so hard on the leash that he would practically pull our arm out! It was almost impossible to walk him.

That December, we decided to put Bunker in a boot camp training where we didn’t see him for nearly a month. We’ve heard many success stories so figured we’d give it a shot. The training was focused on negative reinforcement with very fierce corrections.  This method stressed out Bunker considerably and only seemed to make him scared and anxious. While he did start to do a little better in the classes afterwards, he immediately regressed to his old self shortly after.

A year later, we decided to move on to a different trainer. Again, we left him with the trainer for a few weeks and then had on going sessions with him afterwards, where we would walk Bunker around our neighborhood. This trainer also focused on harsh corrections and recommended a shock collar. After his time spent with the trainer, he told us Bunker was all better. During one of the follow up sessions, the instructor had Bunker on a very long leash and let us know that he would not be reactive towards any dogs. Well, as soon as one of our neighbor’s dogs started barking, Bunker ran up to his fence aggressively. The trainer was shocking him with the electric collar, however Bunker was not responsive to it and he ended up getting bit by the other dog.  We were not happy and quickly realized these corrective training methods were not helpful for Bunker.

We had almost given up! In August 2014, we were at Best Buy and saw AZ Dog Sports. We decided to stop by and see what they offered. After talking with Monika about our situation, she recommended a group lesson for Miley (who we were looking to socialize more) and private lessons for Bunker (since he needed more one-on-one attention). After Bunker’s first private lesson, we were immediately thrilled by Monika’s training methods. Instead of negative reinforcement with harsh corrections, Monika focused us on positive reinforcement using treats and praise around other dogs to get Bunker’s attention on us and build confidence around other dogs. We were anxious to see how successful this would be for Bunker.

It took a lot of work and patience at first, but Bunker started to do great in his private classes. He showed a lot of improvement after a few weeks, and we couldn’t be happier! Bunker had eight private lessons, and even though he was doing so well, the idea of doing a group class seemed intimidating and almost impossible. In mid-November, Monika felt he was ready for his first group class. It was hard work at first, but we stuck with Monika’s methods, both in class and at home, and Bunker started doing amazing after just a few group classes! Every class we take him to he gets better and better.  He’s excited to be there and loves the hour of class. He barely cares about the other dogs now!

Outside of class, which is most important, he is MUCH better too. When we see a dog on our walks, he’ll look, and may be even think about doing something, but we use the training techniques we learned with Monika, and he responds to us immediately. Sometimes he doesn’t even look at other dogs, which we never thought could happen! Very rarely do we even have to correct him. It’s incredible!

We now have Miley in agility classes, which work her brain a lot, and she seems to enjoy it. We’ll keep progressing with Bunker and see if we can get him CGC certified someday. The best compliment we received was from Laura’s mom. She’s seen Bunker at his worst and was so blown away by how easy he is to walk now.  She couldn’t believe how much he had changed since she visited last year. 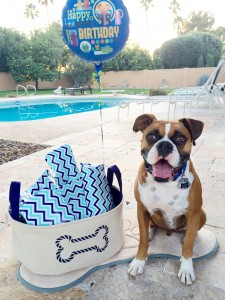 Any type of dog training is not an overnight fix, and this is no exception.  The methods used at AZ Dog Sports do take time and hard work, but in the end the results are absolutely rewarding. We are so proud of how far Bunker has come since we first started taking him here in September.  We couldn’t thank Monika and the staff at AZ Dog Sports enough!

SignUp For Classes
Our Best Deal on Dog Training Classes ...

Instead of signing up for classes on a month to month basis, consider our most affordable option of the 3 month class membership.  It will save you almost $200. Plus you get extra benefits that you won’t get if you purchase the classes one at a time.