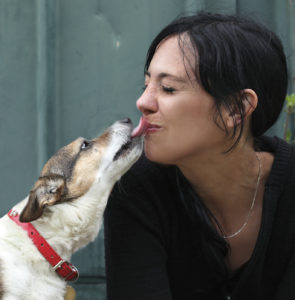 You’re not imagining it. Your dog really does understand what you’re feeling.

Dogs can’t read our minds, no, but when it often seems like they do, it’s because of a special connection between our two species that’s increasingly well understood. Dogs don’t just seem attuned to our emotions. They are.

Human to Dog Bond – the Eyes Have It

Eye-track studies of dogs have shown that they read human faces for emotional cues in the same way we ourselves do. No other species do this, not even chimps. Scientists speculate that this skill has evolved in dogs to enable them to communicate with us on an emotional level. To better understand us. Which makes sense. When you rely on humans for your survival, there’s obvious biological advantage to reading their moods for signs of intentions, impending danger, etc.

Or is it the Voice?

The same goes for barking. Wolves rarely bark, and when they do, it’s to warn other pack members. Dogs, on the other hand, possess an impressive vocal repertoire that spans yowls, yelps, grumbles, whines, acoustic sighs, and many types of barks, suggesting another trait dogs may have developed exclusively to strengthen their teamwork with humans. This goes beyond utilitarian purposes like herding and protecting our livestock. Arguably, dogs have learned to speak a second language specifically to support their bond with us.

And the connection goes both ways: We’ve become skilled interpreters of barks. In experiments in which researchers played recordings of dog barks to dog guardians, they were capable of distinguishing between request barking, anxious barking, territorial barking, and other kinds, without seeing the dog’s body language or the situation. We use the tonality, frequency, and interval of barks to decode the message.

No Matter – The Bond is Special

So, the science backs us up: We do indeed have a special bond with dogs. It’s so strong that we mostly take it for granted and lump dogs in with the rest of the family—because they are family. But dogs are not human. They are remarkable, adaptive creatures that have evolved in partnership with us in a way no other species have. And that’s pretty special.